Most of us enjoyed arts and crafts as a discipline at school. But are these two elements actually the same? Historically speaking, they aren’t. So, what is the difference between art and craft? In this helpful guide, we break down all of the reasons why they’re different from one another, and explore the varieties of creativity found in each discipline!

What Is the Difference Between Art and Craft?

The world of creativity has infinite possibilities of expression, and we largely call the vast majority of it ‘art’. But when handicrafts became popular (thanks to their functionality), the discipline became known as ‘arts and crafts’. While both arts and crafts may be a form of visual expression, they each have their own unique differences, and they are as follows:

The biggest difference between art and craft lies in the fact that the former is an emotional expression of the artist on a canvas, while the latter is a tangible creation of a craftsman that is often purposeful.

Art, for many, is a natural expression of feelings. It’s incredibly personal and subjective to the artist. However, crafting is a skilled occupation that requires practice and good handiwork.

Art is, mostly, valued in terms of viewership. Crafts, on the other hand, bring in monetary value for their functionality.

Because handicrafts are often used for domestic purposes, they aren’t regarded as a luxury in the way that art on a canvas may be.

Are There Different Forms of Art?

We’ve evolved more in the last five decades than ever in the history of mankind in terms of technology and tools. These advancements have paved the way for artists to share their imagination with the world in a variety of ways. To make matters easy, art has been classified into the following six forms:

Among the oldest forms of creative expression, paintings are the epitome of what ‘art’ is defined as in modern times. Paintings are luxurious, awe-inspiring, and highly subjective to the artist’s perspective — this form of art has actually evolved into a study of its own after several art movements transpired in Europe.

In the written word of man, literature is regarded as a creative way of communication. From divine prayers written on animal skin, to hieroglyphics carved into rocks, words have been used for centuries to trigger an emotional response in man.

A three-dimensional art form, the sculpture has been practiced since the earliest civilizations. Artists are free to choose whatever medium they prefer, from modeling clay and welding metal to carving wood, and even assembling different objects — the options are limitless.

In the art of vibrations, music is simply a good melody strung together seamlessly to create a harmonious sound. Instruments made out of natural elements were used and dances were choreographed for pleasure before man even knew what a beat was. Music is an essential part of many cultures around the world.

One of the most incredible forms of art, architecture has been viewed as the most exquisite expression of creativity for centuries. From the towering castles of England to the Pyramids of Egypt, all the way to the magnificent Eiffel Tower — architecture is the carpentry of art.

Some consider cinema to be derivative of literature, while others classify it as a separate discipline, given the addition of acting. But there’s no denying that cinema has quickly become an integral part of society. It influences societal norms and inspires feelings in man through the simplicity of motion pictures.

How Many Types of Crafts Are There? 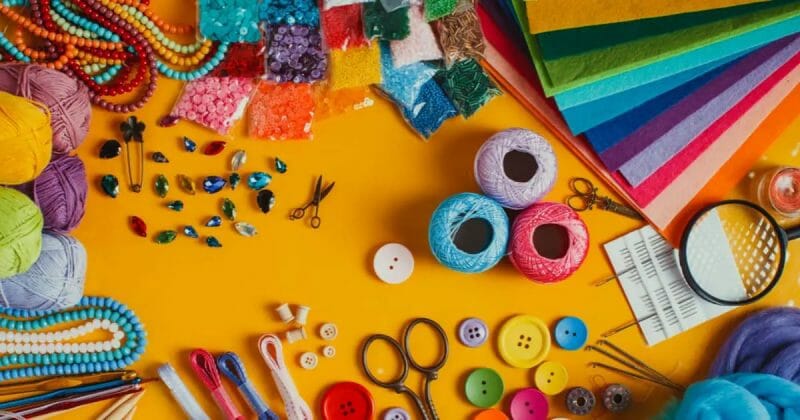 Now that we know how crafting differs from traditional art, we can easily divide handicrafts into five different subtypes based on their function. Here’s a basic rundown of each type:

Also known as dressing up, fashion artisans use different types of fabric to design purposeful garments like delicate jewelry, leather clothing, woolen sweaters, lyocell suits, etc. They also come up with different styles of apparel. Fashion as a craft requires a keen sense of aesthetics, as well as robust attention to detail.

This is where artisans work with different types of fabric by weaving, embroidering, crocheting, knitting, dyeing, or block printing. The end product may be used as apparel or as decor, however, that wouldn’t change the category of the craft because this work still involves fabric.

The crafting activity we all start with in kindergarten, paper activities are one of the most incredible types of craft. It could consist of something as simple as paper-mache, or as involved as origami. Calligraphy is considered a paper craft. Even though it’s a visual expression of creativity, the craft requires serious handwriting skills.

Here’s the epitome of the word ‘craft’ as a whole: pottery. It not only exercises a craftsman’s creativity, but it also boasts functionality for daily use. Artisans use clay to make serving platters, mugs, utensils, and bowls that look good on the shelf. They can be used as decor, and for dinnerware as well.

The most common type of crafts, decorative pieces that require skilled work of the hand come under this category. This includes furniture making, glasswork, metalwork, etc.

Is sketching and drawing a form of art?

Yes, sketching and drawing are recognized as a form of art. These are fundamental skills that artists practice before getting into other forms of art, like architecture and painting.

Is craft a talent?

No, crafting is not considered a talent. However, artisans do have to be skillful with their hands, have patience, and be able to pursue a hobby without getting bored, which is a talent.

Arts and crafts can be a soothing expression of emotion, as they help us unleash our various forms of creativity. The division of arts and crafts is widely debated in the creative world. What is the difference between art and craft? Now that you know the answer to that question, it’ll be easier for you to pursue one of the two disciplines!

Tagged what is the difference between art and craft
Manage Cookie Consent
To provide the best experiences, we use technologies like cookies to store and/or access device information. Consenting to these technologies will allow us to process data such as browsing behavior or unique IDs on this site. Not consenting or withdrawing consent, may adversely affect certain features and functions.
Manage options Manage services Manage vendors Read more about these purposes
View preferences
{title} {title} {title}